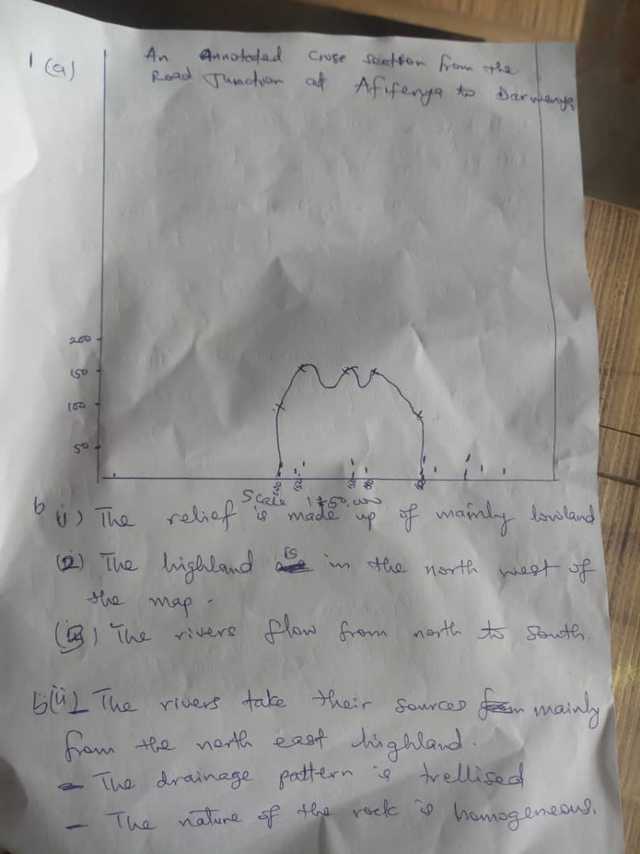 (1bi)
(i) The relief is made up of mainly lowland.
(ii) The highland is in the north west of the map.
(iii) The rivers flow from North to South.

(1bii)
(i) The rivers take their sources mainly from the north East Highland.
(ii) The drainage pattern is trellised.
(iii) The nature of the rock is homogeneous.

(3a)
Mode of formation: Chemically formed sedimentary rock are formed when chemical sediments accumulates over a long period of time. These sediments then combine and undergo further processes to form rock.

(3c)
(i) They serve as a source of minerals such as halite ie common salt.
(ii) They produce limestone used in producing cement.
(iii) They houses fossil records.
(iv) They help in housing coral reefs which serves as tourist attraction

(8a)
Food chain can be defined as series of network in an ecosystem. It shows how the organisms are related with each other by the food they eat.

(8b)
Energy flow within a terrestrial ecosystem:
Energy from the sun is received by the producer which are plants, produce their food and hence when consumed by the consumer energy is passed, when the consumer which are animals feed on the plant, they absorb energy, use some for body development and when consumed by a higher animal, the energy is also utilised and finally when the organism dies, decomposers act on the organism and in which some energy is used and stored. Energy generally reduces down the food chain.

(8c)
(i) Plants absorb nutrients from the soil into their roots.
(ii) Animals get nitrogen from plant consumed.
(iii) Ammonication which is part of decaying process.

thanks for your kindness