(2b)
(i)Agriculture: Areas with well developed farming of crops or animals are often densely populated.
(ii) Secondary industry: Those areas in which manufacturing has developed tend to be densely populated. It is worth noting that even in old industrial areas in which manufacturing has declined or even closed, population densities may remain high.
(iii) Accessibility: Areas with well developed transport infrastructure and links through road, rail, shipping, canals and air are likely to be more densely populated than areas which are poorly connected
(iv)Conflict: Wars and conflicts can lead to significant movements of population and a simultaneous decrease in density in some areas while others may increase.

(3a)
(Pick three)
(I)it provide door to door services ie it can get to anywhere within the country
(II)it makes goods available where they are scare
(III)Road facilitate the movement of people within a short distance
(IV)it feeds water ,rail and air transportation
(V)It is the most common means of transportation


(3c)
(Pick four)
(I)Agricultural raw material such as cocoa ,cotton,palm produce ,timber etc are mostly conveyed by road to the processing factories scattered all over the country
(II)it leads to increased agricultural, mineral and industrial production
(III)It aids the movement of people or labour and capital
(IV)it gives rise to employment opportunities
(V)It links areas of production with areas of com sump in a country

(4a)
Draw the map and locate

(4c)
(Pick any FOUR)
(i) It aids in boosting the GNDP of the country
(ii) It creates employment for the citizens
(iii) It helps in creating the availability of oil used for domestic purposes.
(iv) It is a source of income to the populates as it boosts the per capital income of the populates.
(v) It is a source of foreign exchange
(vi) It provides market for industrial goods. 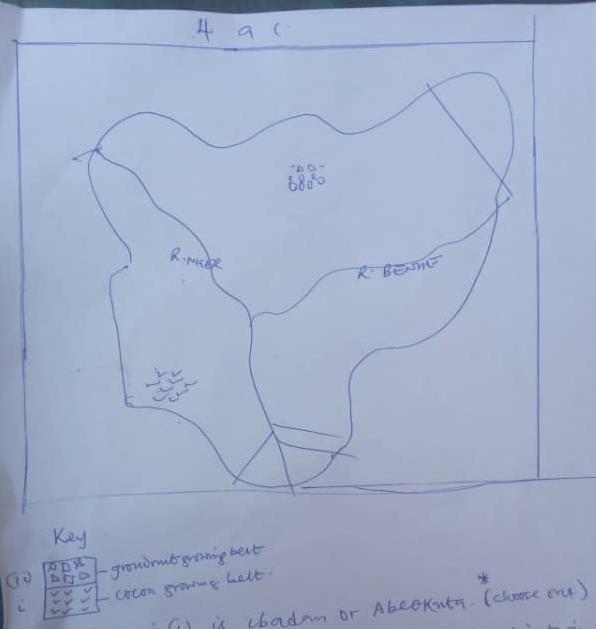