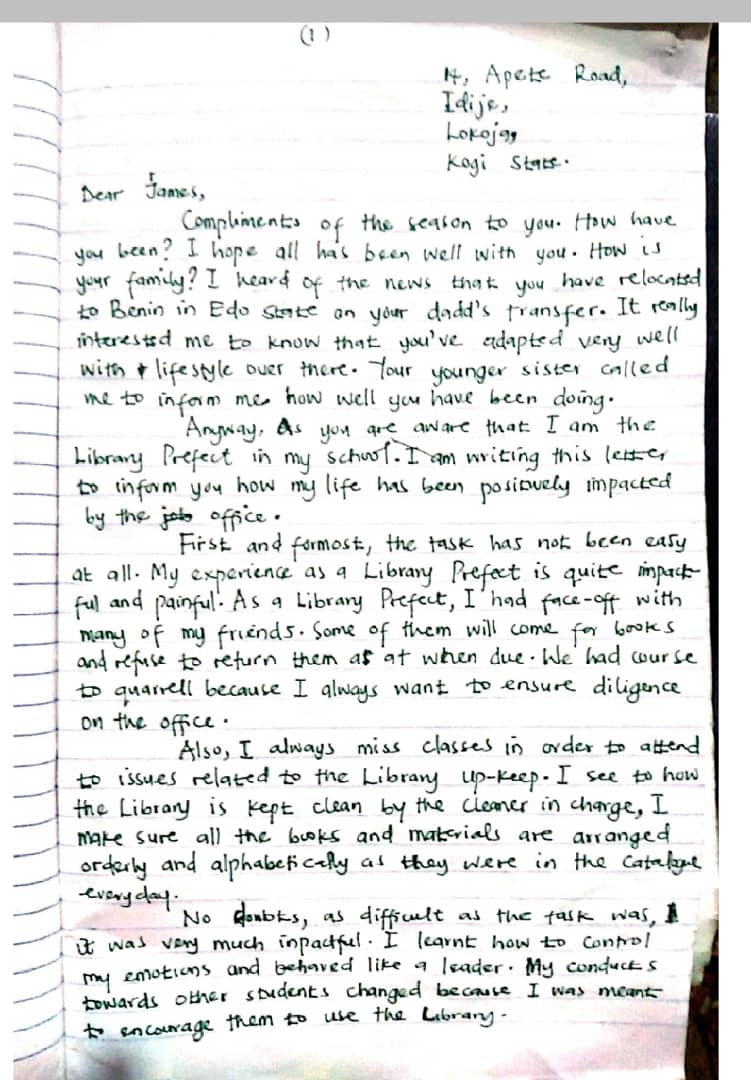 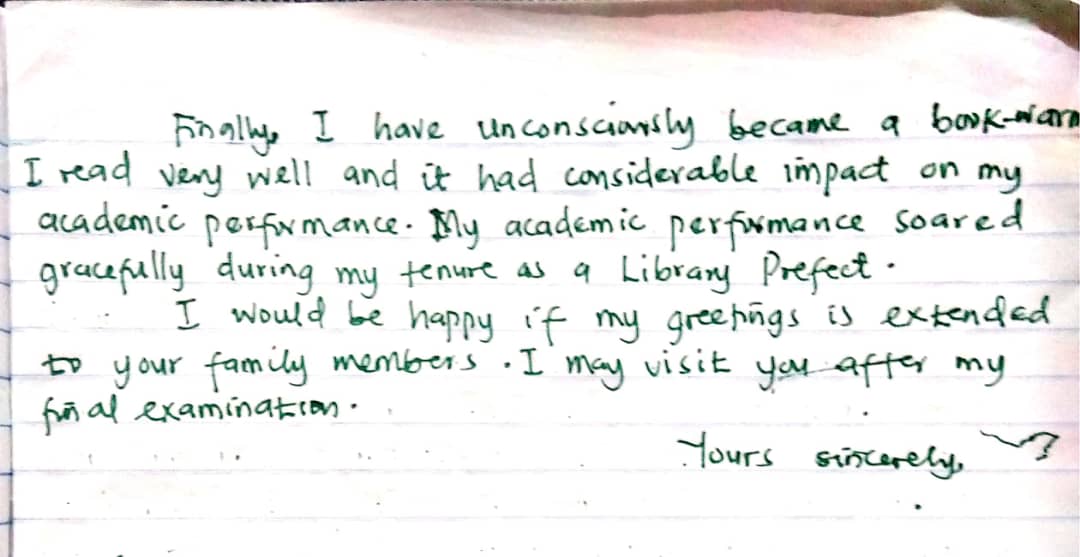 
(6a)
The writer thought Adamu was under a spell because he worked tirelessly.

(6d)
His academic performances tells of his versatility.

(6f)
The zeal to enroll into school even at the young age of eight.

(7a)
(i) Reduces the interest of children in academic works
(ii) Children may pick up bad behaviours from excessive use.
(iii) Affects the health of children
(iv) Reduces interaction between children and parents


(2)
CAUSES OF GROWING INCIDENCE OF DRUG ABUSE AMONG YOUTH AND WAYS OF CURBING IT:
Youths, especially those in secondary school tend to see the drug user as one who is tough, bold and strong. Many youngsters have been known to use drugs at the instance of peers, elders or siblings. Youths who usually feel inadequate have been known to use drugs to achieve
social acceptance.
There are severally causes of drug abuse among the youth which i will point out vividly.
Firstly, Experimental Curiosity. Curiosity to experiment the unknown facts about drugs thus motivates adolescents into drug use. The first experience in drug abuse produces a state of arousal such as happiness and pleasure which in turn motivate them to continue.
Another cause of drug abuse is Peer Group Influence. Peer pressure plays a major role in influencing many adolescents
into drug abuse. This is because peer pressure is a fact of teenage and youth life. As they try to depend less on parents, they show more dependency on their friends. In Nigeria, as other parts of the world, one may not enjoy the company of others unless he conforms to
their norms.
Lack of parental supervision is another cause of drug abuse in youth. Many parents have no time to supervise their sons and daughters. Some parents have little or no interaction with family members, while others put pressure on their children to pass exams or perform better in their studies. These phenomena initialize and increases drug abuse.
In addition to the above causes, Personality Problems due to socio-Economic Conditions is another cause of drug abuse among the youth. Adolescents with personality problems arising from social conditions have been found to abuse drugs. The social and economic status of most Nigerians is below average. Poverty is widespread, broken homes
and unemployment is on the increase, therefore our youths roam the streets looking for employment or resort to begging. These situations have been aggravated by lack of skills, opportunities for training and re-training and lack of committed action to promote job creation by private and community entrepreneurs. Frustration arising from these problems lead to recourse in drug abuse for temporarily removing the tension and problems arising from it.
Furthermore, The Need for Energy to Work for Long Hours is another cause which has rendered some youths useless. The increasing economic deterioration that leads to poverty and disempowerment of the people has driven many parents to send their children out in search of a means of earning something for contribution to family income. These children engage in hawking, bus conducting, head loading, scavenging, serving in food canteens etc and are prone to drug taking so as to gain more energy to work for long hours.
Finally, Availability of the Drugs is a big factor that makes it easier for abuse of drugs among our youths. In many countries, drugs have dropped in prices as supplies
have increased.
Drug abuse is a problem that is causing serious concern to both individuals and government all over the world. The problem is prevalent among adolescents who in most cases are
ignorant about the dangers inherent in drug abuse. Many of them engaged in drug abuse out of frustration, poverty, lack of parental supervision, peer influence and pleasure. However, with effective counselling programme, the problems can be tackled. With proper look into the aforementioned causes, drug abuse among the youth will be reduced drastically.

PLS NOTE THAT THIS STORY WAS TOLD BY A GIRL, IF U ARE A BOY, DON'T USE THIS:
(5)
I Wish I Had Listened to my parents
Things have happened to me severally and I have always said "I wish I had listened" but this particular one has to be the worst. I never should have gone, I knew it was wrong but I did it anyways.
It all started when my friends (Vivian and Angela) and I got invited to a party. It wasn't exactly for our age but we wanted to go anyways. Our parents said we couldn't go but we kept asking and as the cycle goes, the more we asked the more they said no and the more they said no, the more we wanted to go.
We came up with a plan, Vivian would say she was going to Angela's house for the night and Angela would say she would be in my house and I would say that I was going to Vivian's house for the night. I don't know how we managed to last a week without anybody finding out what we did.
Friday night came and we were in the public bathroom getting ready. We arrived at the party at ten o'clock and had fun. After an hour of talking to random people, I decided to go and get a bottle of water. After getting my bottle of water and leave but I bumped into someone.
"Hey I'm Tobe", he seemed like a normal guy but there was something off, of course I didn't notice that or I wouldn't be here now would I?
We talked and played and there didn't seem to be anything wrong with it, but thinking back now I realised that's where you learned everything, from having strict parents and no siblings to having three fish when I was six. Everything we talked about didn't seem that important, but it was to him.
After a while I told him "I needed to go to the bathroom, do you know where it is?" He told me where it was and that he'd hold my water, I don't know why but I trusted him, which was a very stupid thing to do.
I got back and talked some more, I suddenly got dizzy and Tobe "the hero" caught me when I fell, now I really should mention that Tobe was around 25 and I was 17.
I felt dizzy, sick, faint so many words to describe the feeling but the best word would be drunk but I couldn't be drunk one. Firstly, I'm 17 and I don't drink, secondly, I don't like the taste of alcohol and finally, I drank water all night. But he caught me, when I fell and when people looked, he just said "oh she's just had too much to drink, I'll take her home" and people believed him. Nobody knew who he was, to them, he was just a random guy helping a poor sick girl, how wrong they were.
He carried me down the road and when he tried to put me in his car I struggled, as you would if you were in my situation but I wasn't strong enough and eventually I must have blacked out.
I woke up in the back seat of a moving car. Nothing registered for a minute but then BANG! I remembered all that had happened and started to struggle yet again, which as I look back on, was really stupid, maybe if I'd kept quiet, I would have been able to sneak out if he stopped the car, to get something, but who's to say he would have stopped. He might have stopped already when I was asleep. I must have blacked out again without realising it, because when I woke up I was lying on an old, dirty mattress with no blankets or anything like that. Like any normal person I started to panic and bang on the door, and call out but I got no reply.
After a while of panicking I realised nobody was coming anytime soon so I should just sit back down and try to calm down. That was the moment everything started to click why he listened and asked questions but only answered vaguely, why I felt dizzy after going to the bathroom, everything.
He Drugged Me. Why? I don't know but I'm sure to find out soon.
I really wish I had Listened to my parents when they said " don't talk to strangers" "don't leave your drink down", " don't go" and so many other things but I didn't and now I'm trapped, in some dark, cold room.
I still didn't realise what was really going on until I started experiencing pain around my genital. That was when i realised that i was raped. i Checked and saw blood flowing out. I was later rescued by a passer-by who heard my shout. This was how i lost my virginity.
Seriously, I really wish I had listened to my parents.


ESSAY WRITING
1. You are about to graduate from secondary school and you held the position of Library prefect. Write a letter to your friend telling him/her your experiences and how they have contributed to your life in a positive way.

2. Write an article suitable for publication in a national newspaper on the growing incidence of drug abuse among the youth, stating the causes and suggesting ways it can be curbed.

3. A friend of yours was involved in a fight that took place in school and has been expelled by the school authorities. In a letter to your principal, give an account of the fight and why you think your friend should not have been expelled.

4. As one of the outgoing prefects in your school, write a speech you would deliver at the send-off ceremony for prefects on the topic: The Challenges of Prefectship.

5. Write a story that ends with the statement: I wish I had listened to my parents.