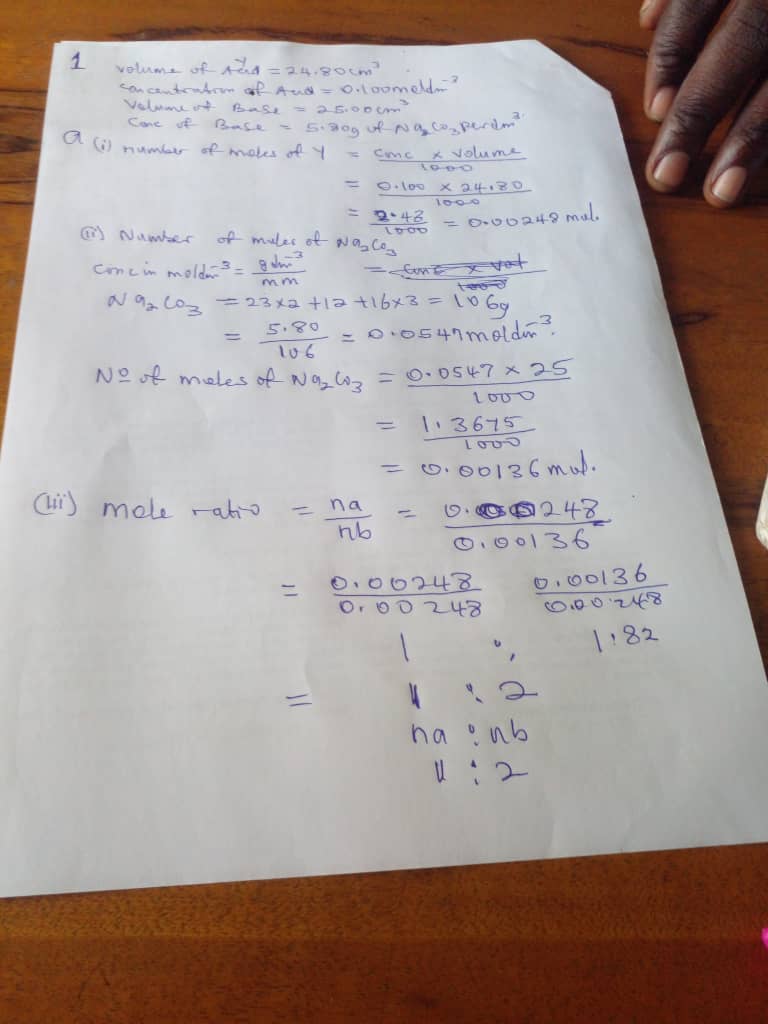 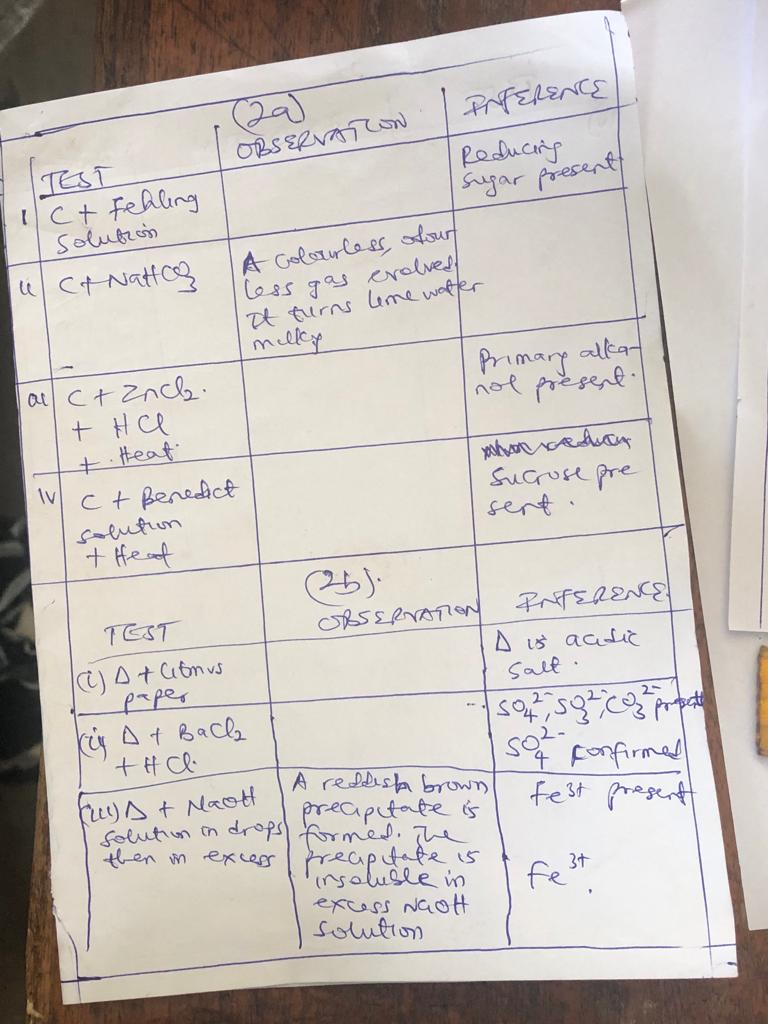 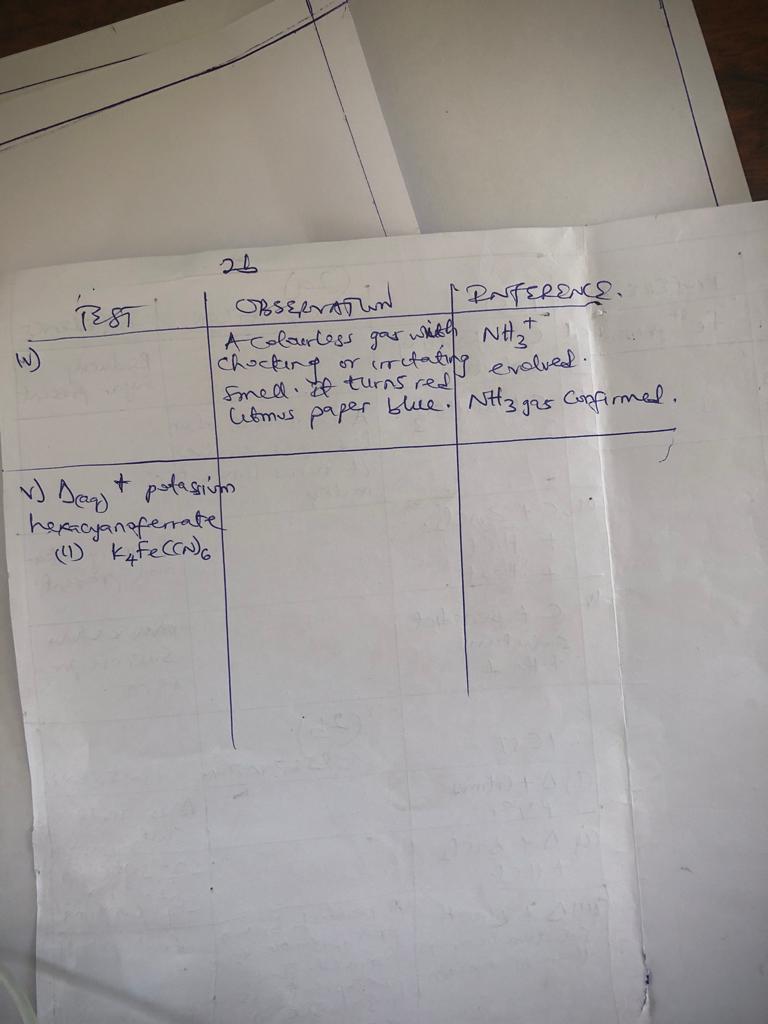 (3ai)
Phenolphthalein is used in titration of CH3COOH2 with NA0H2
Because the titration involves weak acid against Strong Base.

(3aii)
When ZnCO3 is Heated Strongly it gives a yellow colour and when it left for few minutes to cool .
It give white colour

(3bi)
First you dissolved the two inside water, the glucose will be dissolved while the starch remain insoluble.


(1a)
A solution of ammonia is basic, hence it turns red litmes blue.

(1bii)
A catalyst, concentrated tetraoxosulphate(vi) acid must be used to speed up the reaction.

(1cii)
It is used in the production of oxy-acetylene flame used for welding.

(1fii)
Hydrogen gas is geven off with the formation of iron(ii) Chloride (green).

(1h)
Law of constant composition which states that equal volumes of all gases contain equal quantities of particles at constant temperature and pressure.

(1i)
The heat of neutralization (ΔH) is the heat evolved when an acid and a base react to form a salt plus water. 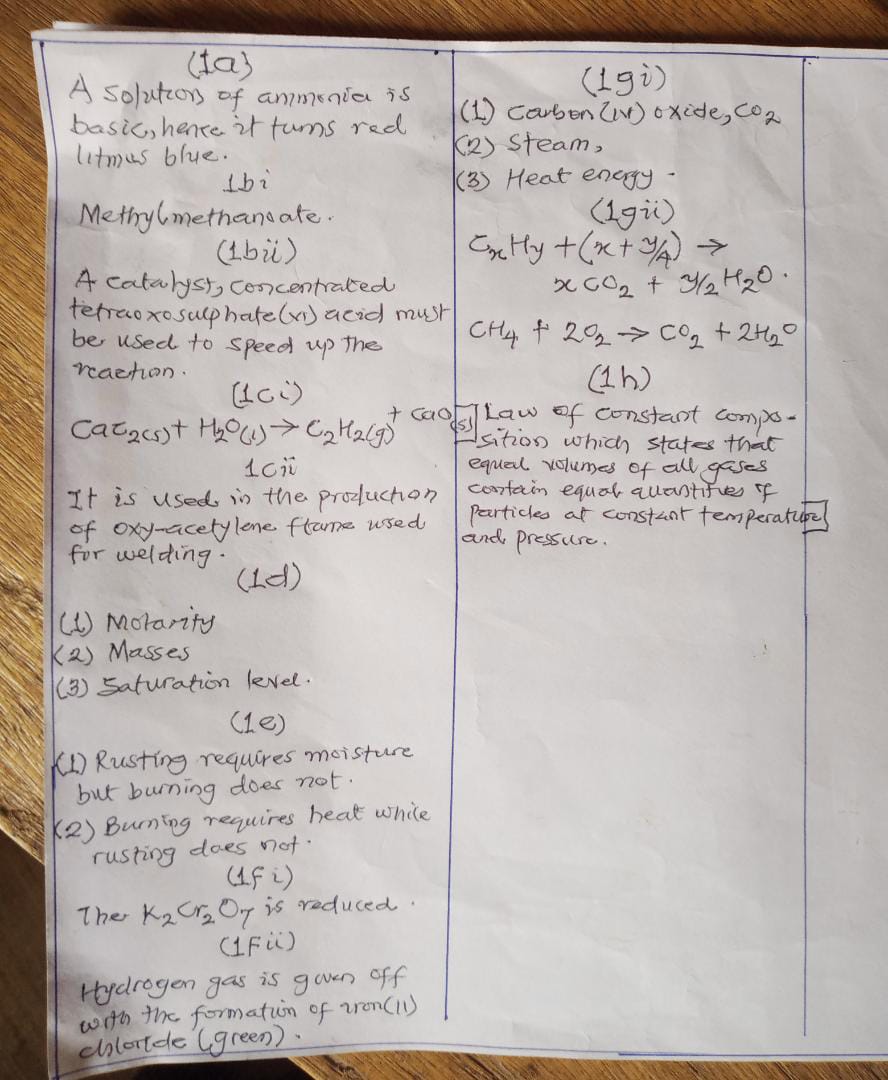 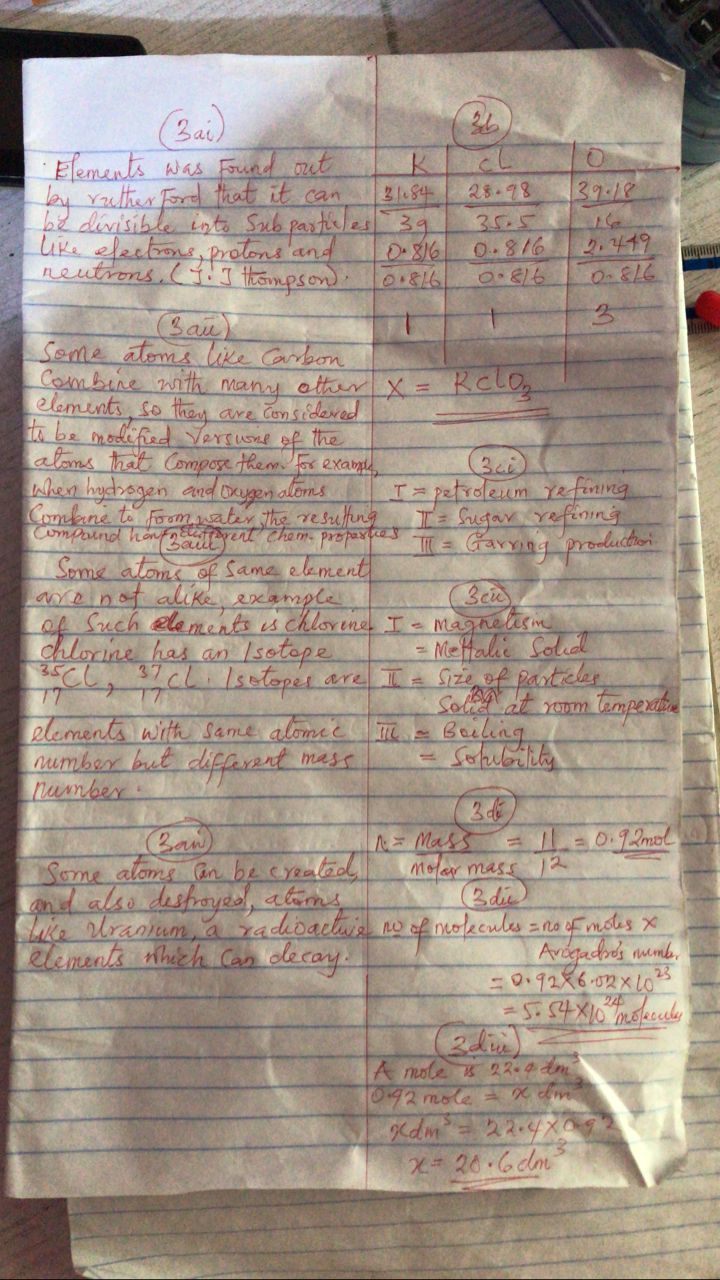 (4ai)
(i) Carbon: A filter with granular activated carbon is used to remove certain chemical mostly Organic chemicals which gives odor or taste to the water, such as Hydrogen Sulfide.
(ii) Chlorine: This is added to water during treatment in order to kill parasites, bacterias and viruses. This process is called chlorination

(iii) Sedimentation: Sedimentation is one of the steps water treatment plants use to separate out solids from the water. During sedimentation, flocs settle to the bottom of the water because they are heavier than water.

(4bi)
When humans burn fossil fuels, sulfur dioxide (SO2) and nitrogen oxides (NOx) are released into the atmosphere. Those air pollutants react with water, oxygen, and other substances to form airborne sulfuric and nitric acid. These pollutants causes acid rain

(4bii)
Acid rain can ruin buildings and statues by stripping away the material and corroding metal that makes up these structures.

(4ci)
Allotropy is the existence of a chemical element in two or more forms, which may differ in the arrangement of atoms in crystalline solids or in the occurrence of molecules that contain different numbers of atoms

(4cii)
In a graphite molecule, one valence electron of each carbon atom remains free, Thus making graphite a good conductor of electricity. Whereas In diamond, they have no free mobile electron. That is why diamond are bad conductor electricity.

(4di)
Water is called a 'universal solvent' because water can dissolve much more substances than any other liquid found in nature but water cannot dissolve every substance.

(4dii)
(Pick Any TWO)
(i) Hard water is unfit for washing as it is difficult to form lather with soap.
(ii) Scum may form in a reaction with soap, wasting the soap.
(iii) Furring of tea kettles will take place due to the formation of carbonates of calcium and magnesium.

(4diii)
Due to hydrogen bonding in water which is not in Hydrogen sulphide, water will have the stronger intermolecular force and hence, more temperature will be required to boil it.