Good Day,
WAEC Starts on 4th of August and Our payments for the Questions and Answers Supplies Will End Soon  Pay Now and join the success team.

(2b)
(i) Transport: In the modern times there is a vast distance between centers of production and the centers of consumption. This difficulty is removed by an important aid to trade known as Transport.
(ii) Communication: Communication means transmitting or exchange of information from one person to another. Communication can be oral or in writing. It is necessary to communicate information from one to another to finalize and settle the terms of sales such as prices of goods, discount allowed, the facility of credit, etc.
(iii) Warehousing: Warehousing is an act of carefully storing goods in warehouses to sell or distribute them later. Warehousing is essential because there is a time gap between production and consumption. In other words, goods, which are produced at one time, are not consumed at the same time.
(iv) Advertising: Advertising fills the knowledge gap and it solves the difficulty of information. Exchange of goods and services possible only if producers can bring the products to the consumers.
(v) Banking: Banking solves the problem of finance. Businessmen receive money and also pays money in large amounts. It is risky to carry a large amount of cash from one place to another. Here comes Banking as a solution.

(4)
(i) Impossibility of Performance: Company may hire and sign a contract to have a public speaker talk at a company event. Once the public speaker fulfills his duties agreed upon in the contract, it is called performance. If for some reason it is impossible for the public speaker to fulfill his duties, it is called impossibility of performance or sometimes "frustration."
(ii) Breach of Contract: When a contract is intentionally not honored by one party, it is called a breach of contract and is grounds for contract termination. A breach of contract may exist because one party failed to meet his obligations at all or did not meet his obligations fully.
(iii) Termination By Prior Agreement: You may terminate a contract if you and the other party have a prior written agreement that calls for a contract termination because of a specific reason. The usual name for this type of provision is a break clause.
(iv) Rescission of the Contract: A rescission of a contract is when a contract is terminated because an individual misrepresented themselves, acted illegally – fraud, for example – or made a mistake.
(v) Completion of the Contract: A contract is essentially terminated once the obligations outlined in the contract are completed. Parties should keep documentation showing that they fulfilled their contract duties.

(5a)
Promotion is an element in marketing. It consist of all communication efforts aimed at generating sales and also concerned with the informing customers of product features and persuading them to buy the product

(5c)
(Choose Any Four)
(i)Risk bearing : This involves anticipating business risks and taking appropriate measures to reduce their impact by talking the necessary insurance cover
(ii)Financing : This covers the provision of funds throughout the period of production to the point of selling through loan and credit facilities
(iii)storage/warehousing : This makes it possible for goods to be produced ahead of demand so that they can be available when needed
(iv)Grading and standardizing : It involves ensuring that the goods conformed to the required standard and quality with respect to the shape,colour ,taste etc.
(v)Transportation: This covers movement of goods form where they are produced to the point where they are required

(6a)
Commercial bank is a type of bank that provides services such as accepting deposits, making business loans, and offering basic investment products that is operated as a business for profit.

(6b)
(i)current account is a bank account that allows you to access a range of everyday banking services, such as receiving money, paying bills, and setting up direct debits and standing orders to make regular payments.
(ii)savings account is a deposit account held at a retail bank that pays interest but cannot be used directly as money in the narrow sense of a medium of exchange
(iii)fixed deposit (FD) is a financial instrument provided by banks or NBFCs which provides investors a higher rate of interest than a regular savings account, until the given maturity date.

(7b)
(i) Keyboard is used to enter characters and functions into the computer system by pressing buttons, or keys.
(ii) Mouse allows the user to position the cursor, draw and execute program functions by clicking mouse buttons.
(iii) Scanner captures images from photographic prints, posters, magazine pages, and similar sources for computer editing and display

(7c)
(i)Reduction in public expenditure: Privatisation help in reducing public expenditure on enterprises that are not viable
(ii)It promote efficiency: privatisation do help to promote efficiency in production
(iii)Generating of more revenue: Privatisation help to boost the generation of revenue for the government
(iv)Emergence of innovations: The existence of competition the industries assists in the emergence of innovations
(v) Better choice by customers: Privatisation policies do assist the consumers to have a wide range of choice where there are abundant products 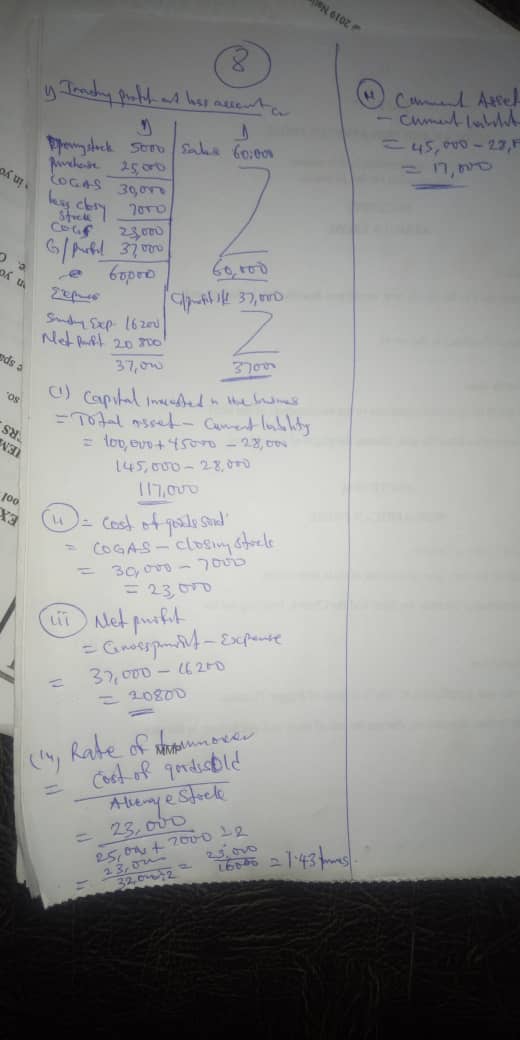