(i) Independence of the electoral body: The electoral body should be made autonomous rather than appendages of the executive arm government. Government should not interfere with the conduct of election.

(ii) Secret balloting: Voting should be done sectretly, so as to give the voters the freedom to vote for canditate of their choice.

(iii) Political education of the electorates: The electorates should be educated on their rights and how to identify party symbols and the proper manner of voting.

(iv) Non-inference: There should be no political interference in the affairs of the commission

(v) Appointment: The officials of the commission should not be appointed by the executive government. It should be done by the independent body whic is the commission.

(vi) Integrity: Those to be appointed into the commission must be people of proven integrity and transparent honesty.

(vii) Legal backing: The commission should be adequately backed up with the laws to enable it command respect and obedience from political parties and candidates 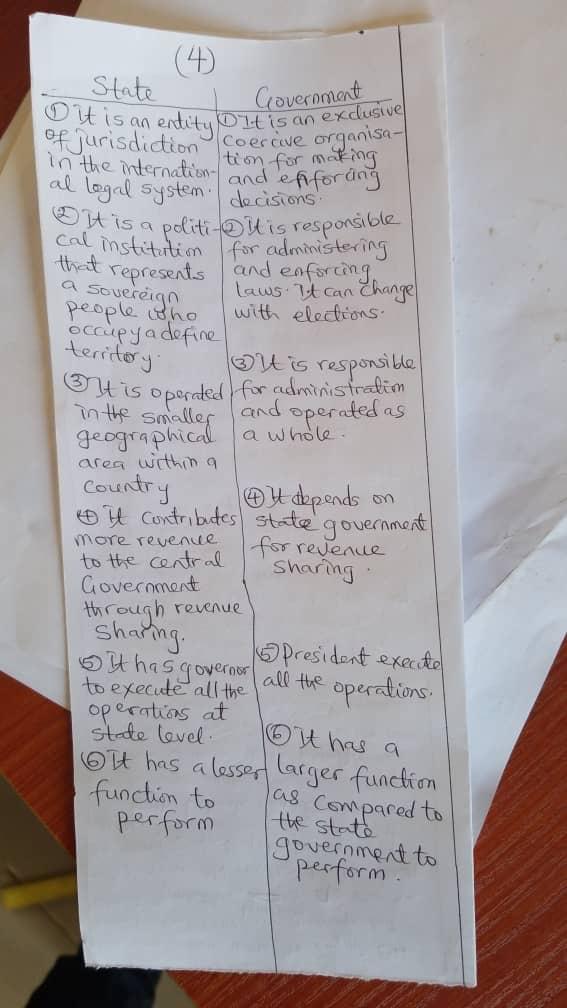 (6)
(i) Settlement of disputes: The traditional rulers performed some judicial functions by settling dispute among the people in their community

(ii) Creation of law enforcement: They also created law enforcement institutions like e.g age grades and masquerade to enable them maintain law and order in the community.

(iv) The use of sanction and punishments: These measures were applied against law breakers in the community, e.g banishment.

(v) The introduction of rewards: people who had contributed to the development of their areas were rewarded with titles or distribution of land and war booty.

(vi) Appointment of Chiefs: Chiefs were appointed by traditional rulers in order to use them to control their subjects

(vii) Conscription of youths: The traditional rulers conscripted youths to perform forced labour and serve in the British army during the world wars.


(9b)
(PICK ANY FIVE)
(i) Ultimate goal: The ultimate goal of the E government is to be able to offer an increased portfolio of public services to citizens in an efficient and cost effective manner. E-government allows for government transparency. This is important because it allows the public to be informed about what the government is working on as well as the policies they are trying to implement.

(ii) Efficient performance: Many changes such as marital status or addresses can be a long process and take a lot of paper work for citizens. E-government allows these tasks to be performed efficiently with more convenience to individuals.

(iii) Political participation: E-government is an easy way for the public to be more involved in political campaigns. It could increase voter awareness which could lead to an increase in citizen participation in elections.

(iv) Convenient and cost effective: It is convenient and cost-effective for businesses and the public benefits by getting easy access to the most current information available without having to spend time, energy and money to get it.

(vi) Accountability: E Government transparency will give insight to the public on how decisions are made and hold elected officials or accountable for their actions. The public public servants could become a direct and prominent influence in government legislation to some degree.

(vii) Interaction with computers: E government allows the citizen to interact with computers to achieve objectives at any time and any location and eliminates the necessity for physical travel to government agents sitting behind desks and windows.