(8)
the Three Pigeons, where Tony fraternizes with several other drunken men, they all urge Tony to sing a song, and he sings of how liquor provides the best learning, while traditional school wisdom can be ignorance. The song also touches on the hypocrisy of men of manners, who like liquor as much as anyone. The song is a great hit amongst the drunkards, who speak amongst themselves of how wonderful it is to hear songs that are not "low.” They also reminisce to themselves about Tony's father, who was "the finest gentleman" in the way he celebrated life. The landlord brings news that two gentlemen have arrived, and are lost on their way to Mr Hardcastle's house, Tony guesses quickly they must be Marlow and Hastings, and since Tony is still angry about Hardcastle's insults, decides he will play a joke on his stepfather. He will convince them that Hardcastle's house is in fact an inn and so will they present themselves there not as gracious guests, but as entitled patrons. He has the men brought to him. Marlow and Hastings are in poor spirits from a long day of travel, Hastings more so because Marlow's reserve prevented him from asking directions. Tony gives them nonsensical directions to Hardcastle's that make the place sound many miles away (when it is in fact down the road). Tony interrogates them, and they tell how they have heard about Hardcastle's well-bred daughter and roguish, spoiled son. Tony argues that their information is reversed, that the son (himself) is much loved and the daughter is a "tall, trapesing, trolloping, talkative maypole”. The men ask the landlord if they can stay, but, at Tony's instructions, he tells them there is no room, and so Tony suggests they head down to a nearby inn he knows of. He then gives directions to Hardcastle's house, cautioning them that the landlord there puts on airs and expects to be treated as a gentleman rather than servant. They thank him, and leave for Hardcastle's home, and so the stage is set for the comedy to come.

In brief, the country, the land and its leadership have become the people’s enemy rather than their partner in the quest for a better standard of living.

The state has not only failed in its sacred duty to create the kind of environment that will enable every Nigerian to work and realize their dreams. In fact, it has actively done everything, placing obstacles everywhere and lying in ambush ready to prevent the ambitious ordinary Nigerian to blossom and prosper.

In other words it further express that the last stanza concludes the poem with the important point that the land "lies patiently ahead". The impression given here is two-fold. The first is that the land is patient and determined to see her desire and wish translated into reality. The other impression is that land, in its infiniteness, will always be ahead of the people treading on it. Given this background, we later learn that the land lies in ambush of people in pursuit of hopes and possibilities elsewhere,

(11)
"Birches” was published in 1916. It should be noted that Frost's "Bircher" was influenced by his boyhood experiences of winter and summer in Northern New England, where he would swing on birches, which was a popular game for children in rural areas of New England, one of the states on the east coast of America, In this poem, the reader is made to understand that the narrator looks at the birch trees in the forest and imagines that their bent nature is as a result of a boy "swinging" on them. However, he knows that the bending of the tree branches has been caused by ice, as a result of the weight of the ice on the branches. For the poet, climbing the birch is a means of freedom and thus the act of swinging on birches is presented as a way to escape the hard reality of life in its entirety, even if for a brief period of time. When the boy climbs the tree, the assumption is that he is ascending towards a celestial plane
of experience, “heaven", a place where he and the elements of his imagination can be free. Climbing a birch is an opportunity to "get away from earth awhile/And then come back to it and begin over" The idea that runs through the poem is that the harsh realities of life make it imperative that a place of refuge, even if it is for a brief period of time be created or located. The birch tree becomes a transcendental escape from the worries of this earth. This conception is derived from a psychological reading of the poem. In this case, climbing birches seems synonymous with the imagination and the imaginative act is a push toward the surreal, the less practical and pragmatic. The poem is therefore very graphic. The poetic persona remembers his childhood days of climbing the birch trees and he is nostalgic. He takes the joy to describe the life/span of the birch tree. He describes the processes of leaves production to its withering with much childhood gusto. He explains the beautiful sight of the tree after the rain and after the breeze. He also describes how the shells crack open, causing a heap on the ground. He describes the beautiful sight as the dome of heaven falling. After being so engrossed in the sweet imagination, the poetic persona escapes out of his platonic utopia and reality dawns on him, the "truth broke in”.

(2)
On his "Good Morning, Ghana" (GMO) Show, Sylv Pohoone Ms. Komame to discuss the street cluild phenomenon on a certain moming Ms. Kiamame runs a non vemmental organization which had done "a study of the phenomenon in Acer a few months before" . Onpromptings from Sylv Po, Ms Kamme lists some of the actors contributing to the emergente of the situation as poverty, absentee fathers, ignorance, distorted beliefs and perceptions, AS well as sheer irresponsibility and misplaced priorities. She, however, admits that there are very poor parents who do not allow their children to take to the streets. Ms. Kamame expounds on the issues of absentee fathers to include not just those who run away or refuse to assume their responsibilities but also those whose perception of fatherhood
is limited to providing food, shelter and school fees. The consequence in either case is the overloading of the mother with the burden of two. When the burden becomes unbearable, she unloads i.e. she hands off the child. become tomorrow's adults without respect for human life. with "Hallo! Hallo!" Sylv Po tries to make light of the hitch but the caller will not give She also implicates ignorance and attitude in the cause of the phenomenon. Many women, like Foto's mother, continue to have more babies despite financial incapacity to take care of the ones they already have. They are also ignorant of the opportunities available to avoid unwanted pregnancies and protection against STI's. These women tend to prove their womanhood by the number of children they have. Girls are also pressurized to prove their womanhood regardless of whether they have the means to care for a child or not. Childless married women are frowned upon more than single unmarried mothers while a single girl above sixteen is called "man- woman" by the people. To Sylv Po's question about why, besides poverty, fathers do not care for their children, the lady notes that such men do so after abandoning their wives to marry other women and having new babies. At this point, a voice barges into the programme with 'Hallo! Hallo!' Someone wants to get on to the programme before the lines are opened. The producer promptly turns off the sound of the telephone so that the programme can continue undisturbed. As the signal button light of the phone keeps flashing, showing the persistence of the caller, the producer signals Sylv Po to round of the discussion with Ms. Kamame so that the caller can be given a special consideration Ms. Kamame illustrates men's irresponsibility with the case of a church elder who abandons his wife and six children to marry a young woman who is a new member of his church after claiming to have seen a vision from God revealing that the six children are not his, and that the young lady is the new wife for him. In response to some other questions from the show presenter, the woman says her organization is directing awareness to women and girls who are more likely to neglect their children and make street children out of them" . She also points out that the phenomenon is more prevalent in cities than villages due to the contrast in social realities of the two settings. Finally, she advises people with comfortable lives to show concern in the phenomenon because its sustenance has implications for the entire society; that the street children of today would The presenter has barely finished thanking his guest when the persistent caller barges in again with "Hallo! Hallo! sylv po tries to make light of the hitch but the caller will not give a breathing space as he repeats his "Hallo!, Hallo!" Sylv eventually responds with "Hello!" and requests the caller to tell his or her name and where the call is coming from. She dismisses it as unimportant and is allowed to go ahead with his contribution. In substandard English, the caller rants about the station not heeding his information about the dead girl who die behind de blue Kiosk”. He says the girl's name is Fati, and that "she dies because she does something bad” (p. 113). She abandoned her older husband in the village to come and marry a younger man in the city. When asked if she knew the said Fati, she dismisses it as unimportant. Asked about where she works and what she does, she also dismisses same as unimportant. Frustrated, Sylv Po asks the caller to tell what is important. The woman rambles on about seeing the dead girl, being certain it was Fati and concluding that her face was so mutilated that the mother could not have recognized the girl as her daughter. Po's attempt to challenge her ability to recognize a face the biological mother could not have identified suddenly invites a bang! The caller drops the line. Po announces her drop of the call but assures his audience that the last has not been heard of the case. 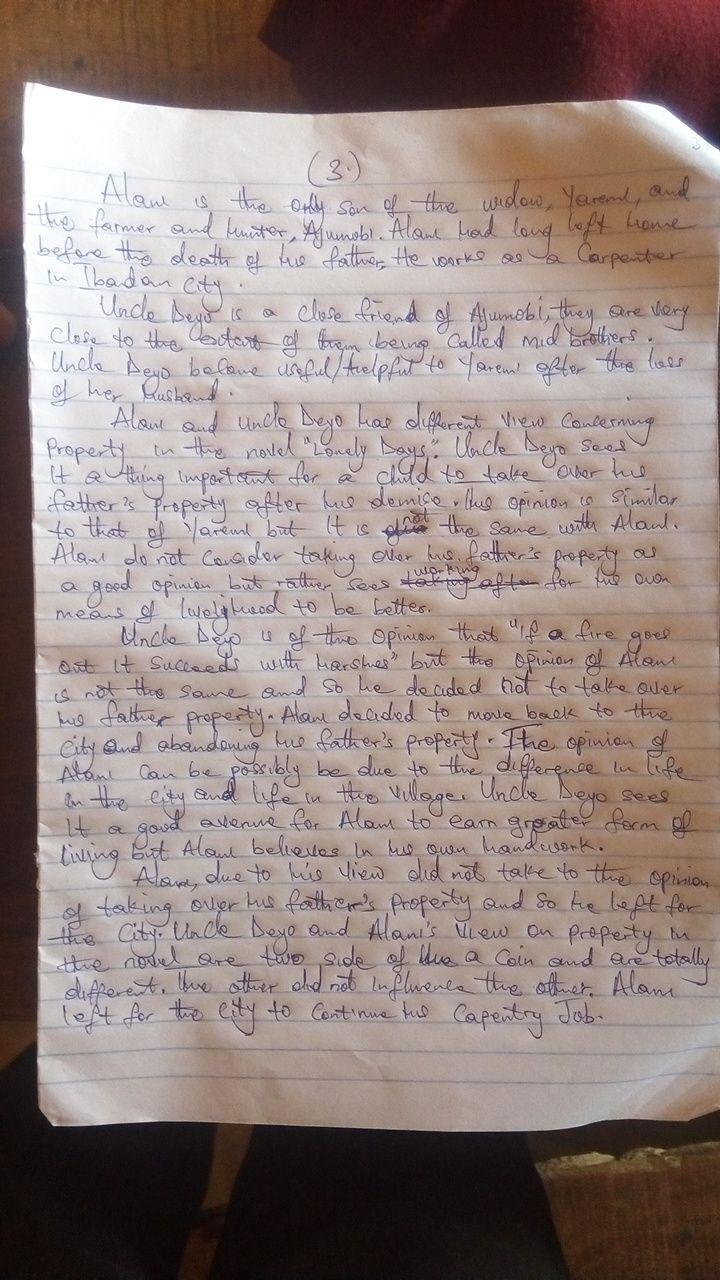 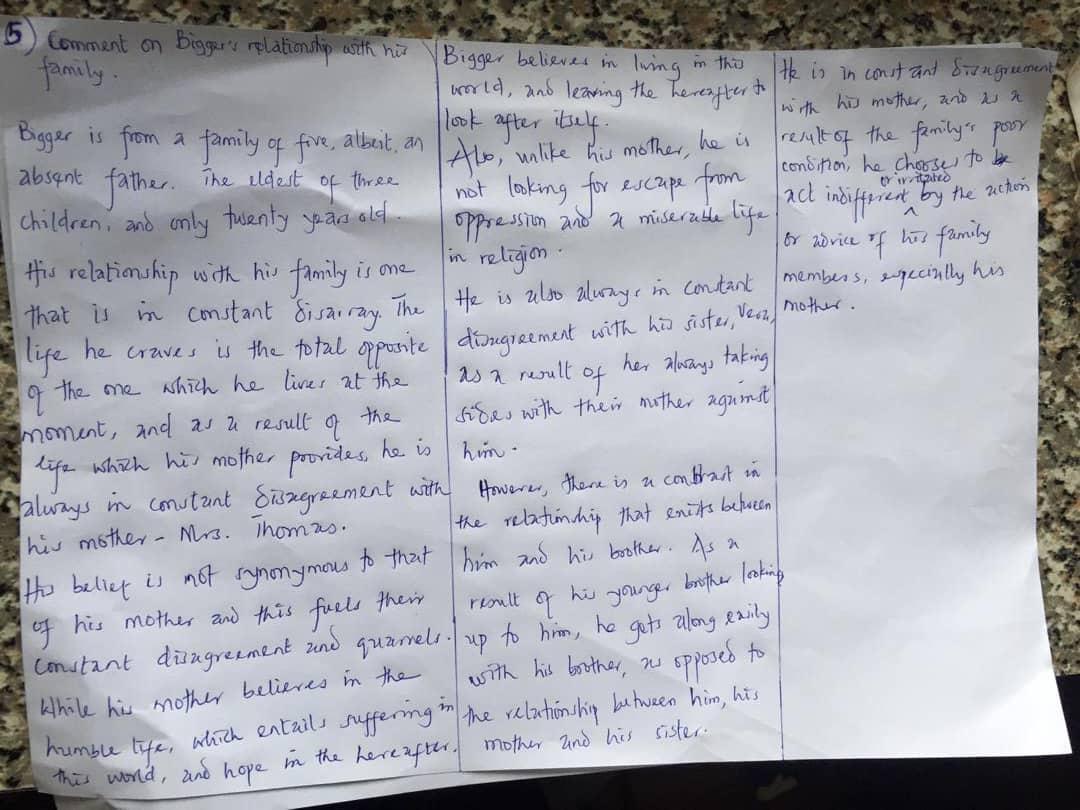 (8)
Diego; One of Manfred’s servants. After Isabella escapes the castle and the servants are instructed to find her, Diego is shocked to find a giant foot and leg in armor in the gallery.

Jaquez;Another of Manfred’s servants searching for Isabella throughout the castle. Though he did not see the giant leg in armor himself, he was with Diego when the latter encountered it and recounts the tale to Manfred.

In other words diego and jaquez the two of the servants in the castle working for prince manfred. They are the ones who claims to have seen giant in the house and plead with their master to have the castle exorcize because it is enchanted.